skip to main | skip to sidebar

One afternoon I was thinking of searching for a character that has the most similar gameplay traits to Eddy Gordo. Eddy's my main character, who I've been using competitively since 1999 but I can't use him in Tekken 7 since he's not in it yet; well one can believe..

The idea of using a pie chart or something like it to find Eddy's replacement with the help of a computer came to mind, but how do I do it?

I started listing what are the Capos good & bad at in TTT2.

Then I made a table listing the names of characters in T7, put check marks based on my knowledge of each of their capabilities. Some of their traits are not strictly defined by numbers. Having 'Good Throws' is basically saying a character has a unique throw that can do over 40 damage. But for something else like a character's poking ability, how could I define it? I decided to base it on indefinite things; do I feel I have enough fast moves to put pressure on my opponents when I play a certain character? Honestly this whole idea can be executed better but I moved on so I could see the final outcome.

Afterwards I replaced the check marks with 1, and the crosses with 0. This way the more similar character is to the Capos, the higher his/her points are. It turns out no character has all of Eddy's main gameplay attributes.

I then realized that having a close to exact character to replace Eddy would mean I use a mid-upper tier character since I think Eddy himself is a mid tier character. Why not find one that's better? So I set the filters to find characters with specific characteristics: they must have more than one stance, AND they have quick CH launchers, AND they have good throws.

Add another condition which is no hopkick = False, in other words the character must have a hopkick of some form.

Finally add the condition risky but rewarding high crush = True and I get. 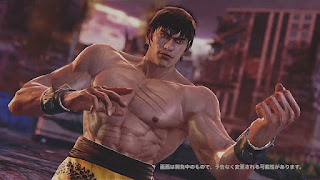 Again this whole thing hasn't been executed very well. There are many things I'll have to revise if I ever want to revisit this idea of searching a replacement for your main character through a computer. Each attribute must be clearly defined, have more definite things like start up frames to base on.

This nevertheless has been an unusual, interesting and fun study.
Posted by LZN at Tuesday, June 28, 2016